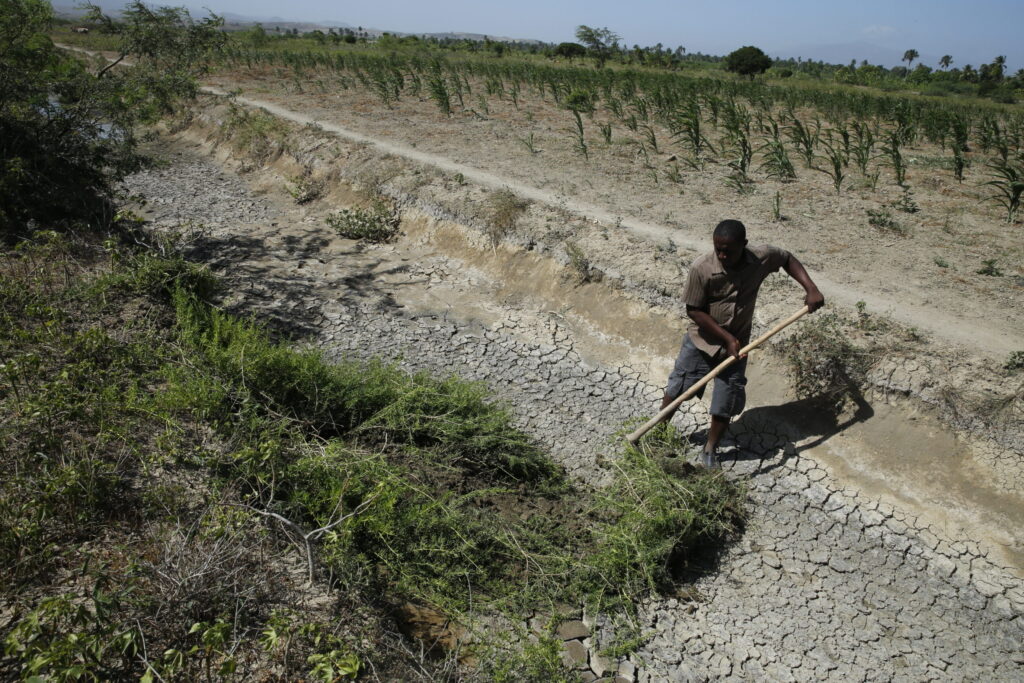 Haiti's farmers are feeling the effects of climate change

Haiti – Haiti has an average of 1400 mm of rainfall per year, but it fluctuates a lot. Some regions see more or less rain, and the periods of rainfall also differ. The amount of water does not meet human needs and those of ecosystems.

With about 1,100 m³ of water available per person per year, Haiti is considered a water-stressed country. Forecasts for 2050, with an expected population of about 20 million inhabitants in Haiti, indicate that the amount of water available per person will decrease to 700m³/year, if the amount of renewable water remains constant. The country would be facing a serious water shortage by then.

“Water” is therefore a crucial problem in Haiti, now that climate change is already clearly being felt in the country. This is especially the case in the northwestern department, where an average annual rainfall of only about 800 mm falls.

Honoré Misselet is a farmer from Poste Métier in the Moustiques catchment, in the northwest. He has been a member of the association for the irrigation of the catchment of the river Moustiques for several years and has also been a board member since 2018. In the great plain of Moustiques, Honoré, like most farmers, grows a wide range of food crops including plantains, beans, maize, tubers, etc. When asked whether climate change is having an effect on his work, Mr Misselet answers ‘yes’ without any hesitation whatsoever. For several years now, he has noticed an increase in temperature, along with longer and more frequent droughts. Harvesting maize twice a year has become difficult. “Intelligent” planting is now the core message, to make maximum use of rainfall. And varieties that are planted now are more resistant to less precipitation.

To assist farmers in the Moustiques plain, Join For Water and its partner ODRINO are digging wells and securing the existing earthen irrigation channels with concrete. The construction of concrete channels prevents water from infiltrating the soil too quickly. The water also reaches the plots faster, resulting in less wasted resources. Join For Water receives financial support from the province of Flemish Brabant, among others, for these projects.

Retaining the rain for as long as possible

Honoré Misselet is happy with this support from ODRINO and Join For Water, because water is the biggest problem farmers are facing. The main challenge is to retain the rain for as long as possible in surface waters or in underground reservoirs. That is why the construction of an artificial lake in the hills would also be considered useful. If that’s close to the irrigated perimeter, easy access to water is within reach.

This solution needs to be studied more closely in the long term, because at the moment the well water in the area is already subject to sodification. This phenomenon is probably the result of the excessive exploitation of the groundwater layers. The salty seawater can therefore easily penetrate the underground water layer and contaminate the freshwater supplies, which even makes the pumped water unsuitable for consumption. This phenomenon is likely to worsen in the future due to the further rise of the sea level.

Climate change is therefore a reality in the plain of the Moustiques, with negative consequences for agricultural production and food supply. In addition, environmental degradation in the river basins has a negative effect on the regulation of the source and river flow and on the replenishment of the groundwater level. But provided the water remains available, Honoré Misselet believes that his 4 children can continue to live with him near Moustiques and won’t be forced to migrate to Port au Prince or even Santo Domingo in the Dominican Republic.