What we do - Drinking water and sanitation for a dignified existence

Better access to drinking water in a fast-growing city

The Congolese city of Bunia is experiencing an explosive population growth as a result of the mass rural exodus. This puts enormous pressure on the drinking water infrastructure. We improve access to safe drinking water in a sustainable way. 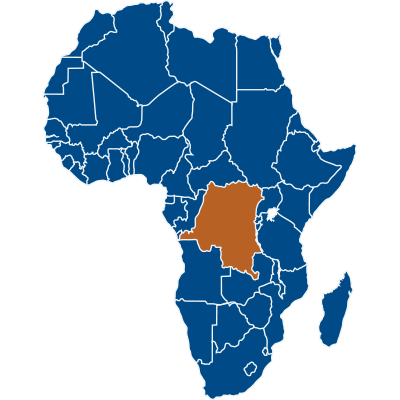 2 out of 3 residents of Bunia have no access to water.

We provide drinking water for an additional 25,000 people.

Bunia is located in the province of Ituri in northeastern DR Congo, a region that has been ravaged for years by extreme violence by armed militias. Like in many other cities, the population of Bunia is growing rapidly. The families are abundant, but there is also a massive influx of refugees from surrounding villages seeking the safety and better economic situation of the city.

Ituri is far from the political power hub in the capital Kinshasa and the population feels excluded from government support. Yet the needs are enormous: the rapidly increasing number of inhabitants is putting great pressure on the drinking water systems. The provincial government cannot keep up with demand and many residents are without drinking water. They have to queue for hours at the water points or travel for miles. As a result, children don’t go to school and adults do not have enough time to earn an income.

Today it is very difficult for NGOs to work in the province of Ituri. Employees are under threat from armed rebel groups and are therefore unable to go to rural areas. If the security situation improves, we can plan for additional drinking water programs outside the city.

Despite being terrorised, the population is standing firm. Some drinking water systems are more than 30 years old and still work, thanks to good maintenance by the drinking water users and management committees.

Together with the organisations CIDRI and SAGE, we set up initiatives that improve access to drinking water. A selection of our activities:

These initiatives are part of a broader program in DR Congo that aims to keep clean and sufficient water available for people and nature alike. Efforts are being made to protect water resources, access to drinking water, and water for food production.