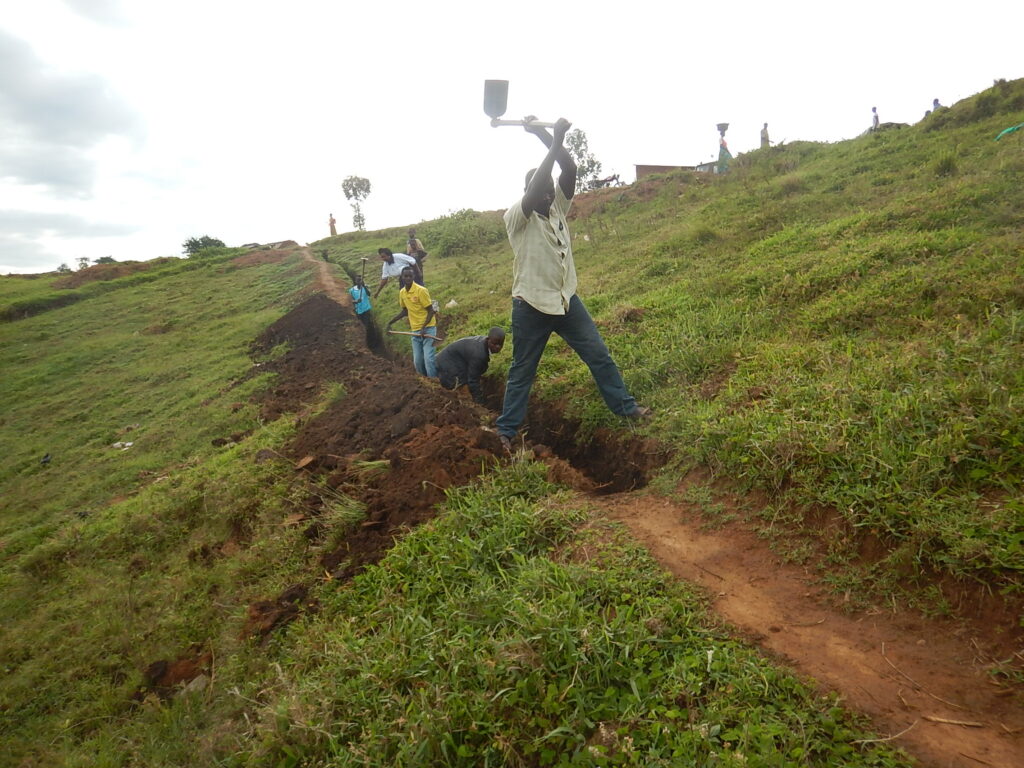 Joining forces for water in Bunia

Each family has to dig 5 metres, this is heavy work. (C) CIDRI

DR Congo – Getting drinking water from the tap is not as easy as it is for us. Families have to do their bit.

In DR Congo, the population is an important partner in the joint effort for more water. Recently, a large drinking water system was added for as many as 30,000 people in the Bankoko district, because the current system is insufficient for the rapidly growing population. There are still sources in the surrounding hills that can bring pure spring water to the settlements, without major pumping or purification costs. This system has already proven to be sustainable: after all, the previous system has been in existence for more than 30 years. Our partner CIDRI works closely with the residents of Bunia. Each family is asked to dig 5 meters of trenches for the pipes. In the morning a truck drives through the city and whoever wants to dig his part just hops on the back. The households that can afford it can also hire and pay someone for this. The project temporarily creates a number of jobs.

The main pipeline will be 16 km long. A long way to dig out by hand, especially if you know that the subsoil also contains a lot of rocks.

Paula Dhiro Njabasi, animatrice CIDRI says about this: “We motivate the people to do their part of the excavation work for the pipes. It’s hard work, and every family must take care of their 5 metres. But little by little we managed to finish all the slots.“

Interest was high and work progressed well: about 300 metres were dug every day. A professional team ensures that the slots run straight, and immediately lays the pipes. Kiosks Join For Water previously provided the old drinking water system in the city with several water kiosks. The kiosks replace the open public water points managed by voluntary committees and aim to provide better access to drinking water. The kiosks are operated by small independents who sell water in jerry cans and at the same time offer some basic products. This way they can be sure that the water supplied generates a turnover that can support the management and repairs. This pilot project produced even more positive results: waiting times are much shorter and the water is continuously available as the kiosk is open all day. For the new system there will only be kiosks, and no more public taps. A total of 17 will be built, with 3 taps for each kiosk.